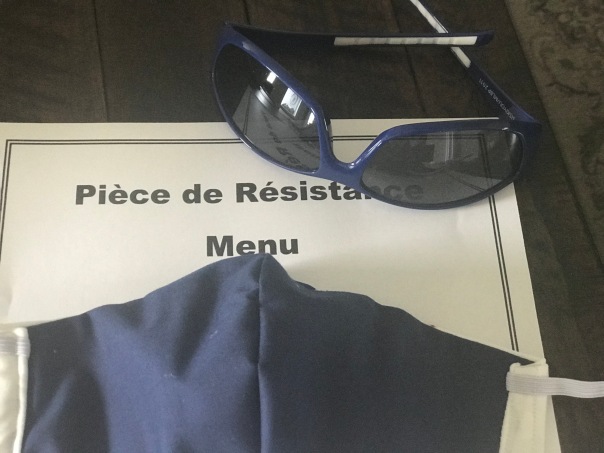 Lily leaned on the counter while she waited for an order, rubbing one foot with the other, then trading off. Dressed in the required black slacks topped with a black polo, the ‘Pièce de Résistance’ logo and her name Lily stitched across the left pocket, her demeanor resembled that of a slouching, sleek cat. Her black and white face mask completed her ensemble.

“Your guy’s outside,” her friend and coworker Becca remarked.

“He’s not my guy,” Lily retorted as she stood straighter, using her pen to scratch the scalp of her short cropped hair.

“Uh, yeah, he is,” Becca cocked her head, aiming her hidden gum smacking mouth at Lily. Lily knew there was a sideways grin hiding behind Becca’s face mask.

Lily shrugged. “Just because he comes around a lot means nothing, except that he likes the food.”

“He comes here every other day. AND, he asks for Lily.” Becca spoke her name with the same deference afforded when eating a mouth full of soggy French fries.

The restaurant’s ordering app came alive as it rang a notification.

“It’s your guy! Jonathan Evans. Oh, and take a look-see. He’s asking for Lily.” Becca raised one eyebrow as she stared at Lily.

In less than an hour Lily grabbed Jonathan’s order and ran outside.

“Here ya go.” She handed the order to him through the car window. Although he wore a navy colored face mask, his bright blue eyes gave away his smile underneath the mask.

“Thank you, Lily.” Jonathan took the bag and placed it on the passenger seat. “Are you having a decent day?”

“It’s going pretty well so far. How about you?”

“Not too bad.” Jonathan toyed with the sack, folding and unfolding the top.

“Do you live around here?” he asked.

A few cars pulled in behind Jonathan’s car.

“Uh, yes. A few miles away,” Lily said as she planted one foot on the other, making no attempt to leave.

‘I’m sorry, I don’t mean to pry. It’s just that I only recently moved here and don’t know many people.”

“No, that’s okay. I enjoy chatting with you, anyway.”

“I’m glad. It’s just that I’ve been here a few times, and I didn’t want to come across as a perv or something. I would like to explain—”

Becca came out the back door, holding four to-go bags in her clasped together arms. “Lily, I’m getting bombed. Can you take the order out to the blue Chevy?”

The rest of the day went like that, busy. To which Lily was glad. Before she knew it, the crew had worked an hour overtime. It was almost midnight when she got home, took a shower, and went to bed.

The next day Becca found her the minute she walked into the restaurant.

As she tied her black apron on Becca apologized for interrupting her parking lot date with Jonathan.

“Yeah, but I hate getting in the way of a budding romance.’ Becca tilted her head.

As Lily started to say something in her defense, her phone vibrated.

“Hey, kid, don’t worry about it.” Becca said with a half-shrug.

Minutes later, Lily came back from the call, swiping away the wetness in her eyes.

“I have to go. It was the hospital. My aunt just died.”

The heavy hospital doors were even harder to push than usual as Lily entered the building. She had been in this place one other time, the day her aunt was admitted. Because of her aunt’s condition upon arrival, Lily, as the only living relative, arranged her admittance. But, because of current hospital regulations, she wasn’t allowed to visit and her aunt’s stay had stretched into over a month.

Although Lily needed the work, she couldn’t go back to her job for fourteen days after her aunt’s admittance to the hospital. Eventually, her boss allowed her to go back when it was evident that she was ‘un-communicable’- as the new employee handbook read. As a good employee, he needed her and she was glad to be back at work again. Besides the money, it gave her something to focus on.

In less than an hour, Lily struggled with the heavy doors again as she left. In her hand, a bag with her aunt’s personal belongings that came with her to the hospital.  As she drove back to her apartment, her stomach lurched and her head started pounding. Relieved as she turned into her complex, she longed for her couch and her old crocheted blanket.

About an hour later, as she lay under her blanket on the couch, hair washed and stomach relieved of its misery, she opened a box. In it were photographs of her parents, a withered dollar bill, and a children’s book.

At the age of five, Lily’s parents died in a car accident. On their way home from a night out, a distracted driver, reaching for a hamburger in a fast food sack, swung into the other lane, just for a second, and hit her parents’ car head on.

At the time, Lily was at home with the babysitter. Her aunt arrived and only as her aunt could, she told her what had happened and that Lily was going to come live with her.

Now, as she half lay–half sat on the couch, Lily kept looking through the contents of the box. She held the dollar bill for a moment, remembering how carefully her dad had placed it in her hand right before he and her mom left for their dinner date that night.

“Here ya go, Sassafrass.” Her dad smiled, calling her by his nickname for her. “It’s Mom’s turn to be my date tonight. Tomorrow is our date day. We’ll get ice cream. Then, we’ll go to the dollar store, like we always do. You pick out your treasure and I’ll pick out mine.” Her dad then showed her his dollar as he stuffed it in his shirt pocket.

“Casey, I really need you tonight.” Lily next lifted the children’s book out of the box. The hardbound cover displayed an illustration of a small brown-haired boy. In jeans and a bright yellow t-shirt, he stood with his arms crossed, his head held high.

Lying there, Lily remembered her aunt giving her the book during those first days after her parents’ death.

As she sat beside Lily on her bed in her new bedroom, her aunt had told her, “Here, Lily. You’re always talking about Casey. I don’t know who Casey is, but I came across this book at the bookstore during my lunch one day and knew I had to get it for you.”

From that day on, when Lily couldn’t fall asleep, her aunt read her the book.

Her earliest memories always  included Casey. As an only child, she had very few playmates. Casey became her constant companion. He would tell her that he would always be there for her. She could tell him everything and he would understand.

Lily’s aunt would explain Casey’s existence by saying he must have been Lily’s imaginary friend. That imaginary friends are very real. They help with growing and coping, all that stuff that needs sorted out. ‘Why,’ she said. ‘It’s quite all right to have an imaginary friend.’ Then her aunt confessed that she had one growing up and she was very glad that she did.

As Lily grew older, she started making friends and slowly came out of the grief of losing her parents. She left Casey behind. Only once in a while, when her best friend Edith moved, or later, when her first boyfriend broke up with her, she recalled Casey and knew that he would always be there for her, if only as a sweet memory and a heartfelt connection to her girlhood. She would remember and somehow, that comforted her.

Lily gently put the book back in the box, closed her eyes, and finally allowed herself to drift off to a not-sound sleep.

Several days later Lily was back to work. Everyone was very nice, but that just made it all the more awkward.

Everyone but Becca. Becca had visited her after her aunt died, knocking on her door and holding a bottle of wine. They had sat on the roof terrace of Lily’s apartment, six feet apart, drinking the wine and not saying much of anything. Just what Lily needed at the time.

Apparently, Lily’s ‘guy’ had been by for his usual takeout order, Becca told her. She said that he was disappointed when Becca brought his order out and asked after Lily.

Lily’s stomach tightened as she read the order. Becca made an off-hand joke as Lily grabbed a takeout order under the hot lamp and smiled at her as she backed out the exit door with the order.

A half hour later, Lily grabbed Jonathan’s order and headed to his car.

“You’re back!” Jonathan took off his sunglasses as he spoke through his mask.

“Yep! I am back,” Lily handed his order through his window as she shrugged. She wasn’t sure he could see her smile behind the mask but hoped her enthusiasm was apparent.

“I want to explain something to you,” Jonathan said.

Oh, boy, here goes, Lily thought. He’s going to reveal that he is weird after all by rambling some demented crazy talk. Or, he’ll tell me he’s moving on, relocating, and can’t order from here anymore. I hope I’m wrong, but be prepared for anything.

“When I was small, about four years old, we lived here according to my parents.” Jonathan began looking down, toying with his sunglasses, his voice low. “We had to move for my dad’s job right before I turned five years old.”

He looked up and continued, “As an army brat, we moved a lot. My mom loved flower gardens and always had one in each of the yards we had. For some reason, I always wanted her to put lilies in her flower beds.”

“Years later, Dad left active duty, retired. They moved back to this town because they loved it here. Right now, I’m living in a townhouse not too far from them, working from home. I’m an attorney, but for now, working remotely isn’t a problem. I visit my parents often, outside of course, allowable distance apart and all that. I get their groceries for them, putting them on their doorstep. Generally, I’m here for them for the time being.”

Lily smiled, not knowing where this was going. All the same, she still felt a tug at her heart as she listened to his story.

Jonathan sighed, then continued, “Anyway, as we sat outside one day, I said something about Mom’s garden and pointedly about the lilies, laughing about how weird it was that I liked them so much.”

“At that point my mom said, “Don’t you know? It’s not that you like lilies. It’s because you had a childhood friend named Lily. You used to adore her. You two were inseparable and you were heartbroken when we had to move. You would say to me, ‘I told her I would always be there for her.’ But you were very young, and in time forgot about your friendship, all that is, except for the name.”

Jonathan peered out the car window at her. Lily could see herself reflected in his eyes as she stood on the other side of the window.

Jonathan explained, “Lily, when I became an attorney, my mom told me I should go by my first name, Jonathan. It sounded more professional. My full name is Jonathan Casey Edwards.  I’m Casey. And I’ll always be here for you.”