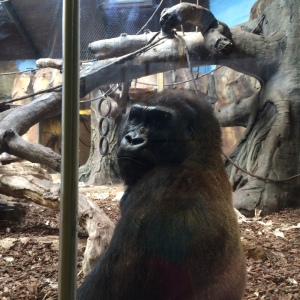 My daughters and I went to the Henry Doorly Zoo in Omaha last year. We had a really good time. We loved the sea lions, tigers, and really enjoyed the aquarium but my favorite memory of that day has to do with a gorilla.

This particular gorilla was very nonchalant. He didn’t care that hundreds of people were taking his picture and oohing and aahing over him. He didn’t care that little kids were climbing all over the window to get a glimpse. I would like to think that as a huge star (which he is) if he were to walk the red carpet before an awards show he would meet his public with the same wearisome expression that he has in my picture.

Giuliana would ask Mr. G about the beautiful fur coat he had on for the occasion and he would just shrug and say. “Dahling, I have had this old thing forever. Now, can you direct me to the closest appetizers? Do you know if they are serving Bananas Foster tonight? Oh, and who are these people (pointing to his adoring masses) and why are they here?”

Now please don’t get me wrong. I love an awards show along with everyone else but sometimes I get a little tired of all the paparazzi. I don’t care about the Dugans or Caitlin. I really don’t care about who broke up or who gained or lost weight, how Melissa McCarthy drives (or doesn’t – although I do like her). It just seems like that’s all we do anymore. Even the morning network news shows have more fluff than food for thought. Or, I know…news!

I believe I can understand how some celebs just go off the rails. When you are poked and prodded so much and every little sentence you utter or outfit you wear or opinion you state becomes a viral Boeing 787 I’m sure it can dislodge a piece of your brain that you never thought was there. A piece that becomes its own Dr. Jekyll.  More than likely that is why a lot of celebs throw tantrums, say things they never would have said to their worst enemy, and/or take a punch at a demanding or irritating reporter. I’m not condoning that behavior but I can understand it.

I guess I’m a little like everyone else in how I am infatuated with quote – the famous- unquote. I love George Clooney, admire Sally Field, and am in awe of Meryl Streep and Helen Mirren. I faithfully watch the Real Housewives of New York and yes, always try to catch the Red Carpet interviews before any awards show. But I change the channel, turn the page, or change the subject when I feel oversaturated with any star’s personal drama. I have enough of my own. Don’t care about their’s.

I’d like to think that the Doorly Zoo gorilla doesn’t like all that attention. As he looks out at us crazy humans he is probably thinking, “What the hell? Don’t you people have anything better to do?” And we should have something better to do. Because although Mr. G was very interesting and I really enjoyed watching him, I moved on. Just as all the rest of the zoo visitors that day. Too bad we can’t say the same when it comes to our own species. Do we really need to become a part of their personal dramas? We need to know when to separate our lives from their’s. After all we do have our own lives to live. Can we just move on, please?