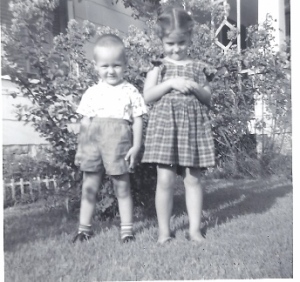 I’m bossy. I was told I was pretty much shaking my finger at the doctor at my birth.  I was hungry and he happened to be the first person I saw.  And so it has continued.  Do I like being called bossy?  I don’t know.

I understand that there is currently a campaign started by Sheryl Sandberg, Founder and Board Chair of Lean In and Chief Operating Officer of Facebook to ban the word bossy.  She has several credible well-known people behind her; Beyonce,  Condoleezza Rice, fashion designer Diane Von Furstenberg, and CNN Foreign Correspondent Christiane Amanpour to name a few.  Even the Girl Scouts are on board.

Ms. Sandberg says that the term bossy is too frequently associated with words such as overbearing, annoying, abrasive and/or pushy.  This ‘label’ continues on through a female’s adulthood.  She hopes the campaign will open a dialogue with parents and teachers to eliminate the use of the word “bossy”, though she concedes this is not really as simple as banning one word.

Thus my mixed emotions.  As a little girl I have to say I enjoyed being called bossy.  It gave me authority.  And the encouragement needed to push my limits. Rebel a little.  It taught me audacity.  I happen to like that.

As a teenager being bossy meant bitchy.  I either had very good male friends that appreciated my bossiness or scared guys away because of it.  But I still used it to my advantage.

As a young mother being bossy came in very handy.  With two daughters I translated “no” into a new language with my stern finger wagging and tone of voice.  They didn’t dare cross me very often.  And in turn, they learned to be quite bossy themselves.

But as I grew older I realized that being bossy involved something more.  Daughters, friends, relatives all understood my demeanor.  Even uncles, nephews, my brother, neighbors’ teen-age sons, and our male pastor/friend appreciated my authoritative ways.   They respected my ideas and me. Many other professional grown men didn’t.

As I grew older and became a part of the business world things changed. In several ways my acumen and initiative were accepted  I deeply respect and admire several fellow male business associates that I dealt with on a day to day basis.  I know that I likewise respect and admire my husband for his wisdom and fantastic confidence in himself which enables him to live with and share a life with a woman that can be bossy more than once in a while.

But I do feel that many people (not only men) do not appreciate a woman that speaks her mind.  One that takes the reins and doesn’t look back.  There are all kinds of obstacles in the way when you are a woman surrounded by people that will not take instructions or suggestions from you, for no other reason than that you are bossy.

Thus, the mixed emotions.  I enjoy being called bossy but I don’t like the aftermath that the adjective throws my way.  If there were another mindset that the term bossy would project I don’t believe the outcome would be as detrimental as it often can be.

At a point when people automatically admire bossy women (and yes I do think bossy is almost exclusively used referencing a woman) and understand that the term stands for direction, objectivity, guidance, and focus, then and only then maybe the word bossy won’t necessarily have to be banned.  Maybe being bossy will be recognized for what it truly means; leadership.

I love holidays.  Any.  Of the traditional ones that is.  I don’t celebrate all holidays, that would be exhausting.  Today is also Submarine Day for instance.  Who knew?

And I don’t know that I am Irish.  There may be a wee bit somewhere, my great-great grandmother’s name was Sarah Ireland.  There had to be something somewhere to have a name like that.

We named our oldest Kelly.  Not because it was Irish, but because we liked the name and had a very nice waitress the day we were contemplating the name that waited on us.  Serendipity rules again!  Kelly did go to Ireland and actually did kiss the Blarney Stone.  But that doesn’t make her Irish.

I like the color green.  But just because it’s a very nice cool, calming color.  Really not because it is the color of shamrocks.

And I love all things pistachio, cake, pudding, the nut itself.  I love McDonald’s Shamrock shakes too.  And salad. Doesn’t make me Irish.

So, as are several other millions of people, I am Irish today.  And so is my husband.  He is of French-German descent.  He loves corned beef and cabbage.  He also likes the movie “The Quiet Man.”  I think I’ll give him a huge kiss!  He can be my Blarney Stone for the day, we’ll drink Shamrock shakes and toast to the good health of a beautiful country!  And to you good blogger friends, here’s an Irish saying:

May good luck be your friend
In whatever you do.
And may trouble be always
A stranger to you. 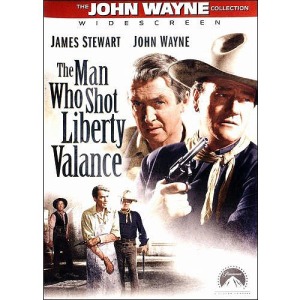 My favorite Western is “The Man Who Shot Liberty Valance.”  You know, the one that had Lee Marvin portraying a very evil man by the name of Liberty Valance? Jimmy Stewart played a very nice book-smart innocent young attorney.  And of course, John Wayne played the cantankerous, wise cowboy named Tom. Jimmy Stewart (Ransom in the movie) was married to Vera Miles (of course). Ms. Miles is Hallie in the movie.  There’s some of that male jealousy thing going on between Stewart and Wayne regarding Hallie.  But in the end, well, you know Tom/John.  He just couldn’t settle down with the little lady.  Even Vera Miles.

Everyone (let alone me) hated Liberty Valance.  He was evil through and through.  He shot people just for the fun of it.  And his idea of a good time Saturday night was coming into a nice western town and tormenting the drunks, women, and children.

Okay, so everybody wanted Liberty Valance dead. Capoot. But no one was crazy enough to try to kill him. Finally, mean Liberty along with his gang of no-goods destroy Jimmy Stewart’s newspaper office (yeah, he was the local newspaper editor too).  Jimmy/Ransom comes back from the saloon (he was a little drunk because he thought Vera/Hallie was in love with John/Tom). He finds his office completely ransacked and destroyed.  In a blind rage he confronts Liberty and challenges him to a duel in the middle of the town’s street.  The question of his sobriety had to enter into this fateful decision.

Needless to say, Liberty is shot dead.  Jimmy/Ransom is know throughout the country as the man who shot Liberty Valance.  Consequently he won a U.S. Senate seat and paved the way for the wild west to be considered as more than its name implied. John/Tom became forgotten as Jimmy/Ransom became famous and a very well respected man earning this respect through fair and great governance.

However, there was one very prominent misconception.  Jimmy/Ransom was not the man who shot Liberty Valance. John/Tom was. During the duel while Jimmy/Ransom cocked his gun and fired John/Tom also fired from across the darkened night street, hitting Liberty in the chest and killing him.

I loved this movie because of its ambiguity, its moral code, and its poignant portrayal of a misunderstood curmudgeon of a cowboy.  The kind that John Wayne portrayed better than anyone else.  I loved that Jimmy/Ransom struggled with his conscience for many, many years. Only to confront himself during a newspaper interview after Tom’s funeral. Resolution.

My other favorite Western has all the nuances of any John Ford/Sergio Leone Western.  Breaking Bad has been considered a modern day great Western.  After all it has the misbegotten and misunderstood characters, lonely people, even bar fights.  Particularly the ambiguity and impervious nature this genre requires.  And it is about the west.  Well, southwest maybe, but just the same.

I can’t say that I’m glad that the series is over.  I will miss it, a lot. However, I do think it went down exactly the way that it should.  Many think that Jesse should have died also.  Breaking Bad became a very dismal view of human nature.  It needed this redeeming quality. With Jesse alive and ‘riding’ into the sunset we were able to own his redemption. Resolution.

The film Liberty Valance portrayed a man that lived with a very important lie all his life. Walter White lived a lie for only a brief time.  Walter’s lie was monumental and because of it destruction and death marked every turn.  Jimmy/Ransom became a great man based on a lie.

I hear that a spin-off is in the works (of course again) with Saul the lawyer as the main character.  Bryan Cranston is on Broadway portraying President Lyndon Johnson.  Jimmy Stewart went on to play Linus Rawlings in How the West Was Won.  I want to believe the west did win.  Ransom/Jimmy did.  I want to believe that Heisenberg won too.